On 23 November 1991, an afternoon English tabloid The New Paper published “Two Cults Exposed” in its front-page headlines. On the same day, the Lianhe Zaobao and Lianhe Wanbao, also published the Chinese translation of the same article, triggering an 8-year legal battle between the church and the publishers. Between 1988 and 1991, the church had grown to over 700 disciples. Following the publication of the articles, many disciples were persecuted by their families and friends and at their jobs.

By faith, the church instituted a suit against the newspapers. Prior to that, no society had ever won a defamation suit against these publications, and the question as to whether the church, as a society, could even institute legal proceedings was as yet uncharted waters in the island state. It would take a total of seven long years and the overcoming of many obstacles to answer the above. 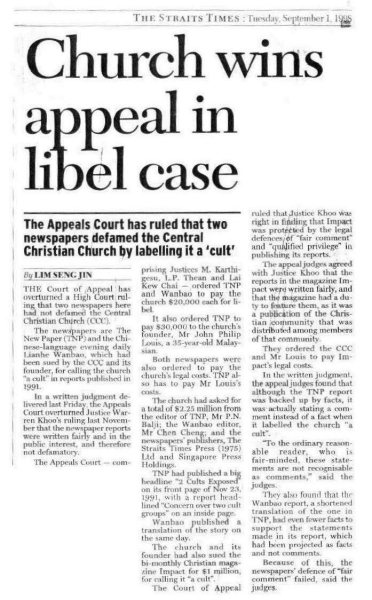 In early 1998, the New Paper, stung by their defeat in the High Court, filed an appeal against the High Court decision. Although the church was reluctant to appeal, it had to file a counter- appeal to protect itself. Once again, the church prayed that God would bring about a favorable outcome. The Court of Appeal upheld the Justice Khoo’s decision that the church is not a cult and that:

“none of their teachings and practices could or would be considered by the ordinary man on Singapore as abhorrent or harmful to society”.

They also found additionally that not only the New Paper, but the Wanbao had defamed the church, hence overturning the High Court decision that the Chinese daily could rely on the legal defence of fair comment. Likewise, the Court of Appeal found that John Louis, who was mentioned in both articles as the founder and leader of the church was defamed, and hence should also be awarded damages alongside the church.

“And God put all things under the authority of Christ, and he gave him this authority for the benefit of the church.”  (Ephesians 1:22, NLT) 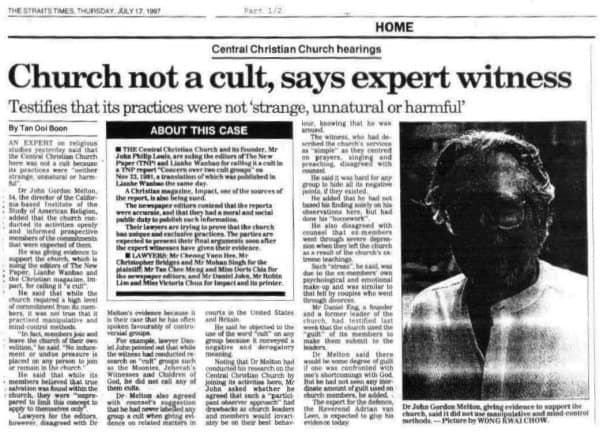 What did the High Court say? With the help of Mr Cheong Yuen Hee, the amazing lawyer whom God provided to fight on behalf of the church, the case went to trial before Justice Warren Khoo in the High Court of Singapore, in 1997. The judge found, after a month of hearing a parade of witnesses from all parties, that the church is NOT a cult! In coming to his decision, the judge said:

“As we know the facts, the CCC, of course, cannot by any stretch of the imagination be equated with such groups. One can say straightaway that CCC is not a commune of half-crazed people living in isolation from the world at large worshipping and kissing the foot of some self-appointed messiah or prophet. Most of its members carry on with their full-time jobs like members of other churches. Its members do not give up their assets to a commune, and its leaders do not live in riches on the backs of its members. It is not a secret organisation run by persons with an agenda which is kept secret from its members. People are welcome to join its meetings and services. In fact it actively tries to get people to attend its meetings and services so that they can see if they wish to join. They are made fully aware of what being a member would involve. People are never deceived or tricked or trapped into joining it.”

The New Paper article was therefore found to have defamed the church with the powerful and sensational effect of the banner headlines. The church was elated by the decision, and overjoyed that God had answered the many prayers that went up to Him during the previous years.

The church is now protected by the decision of the highest court in Singapore. Anyone who wants to say, print and circulate anything negative about the church will have to think twice before they do so. As of the time of this writing (1999), the disciples have had their confidence and faith boosted and are courageously marching forward.

To God be the Glory!

Looking back, we see that God was the one who was in total control all these seven years. He allowed the article to be published. He was the one who appointed the judges. God gave us an incredible lawyer who fought single-handedly against our opponents who had a whole barrage of lawyers on their side. And He made it happen in Singapore, because the legal system in Singapore is respected worldwide.

Scroll back to top